Biden’s Climate Path Through the 2022 Midterms 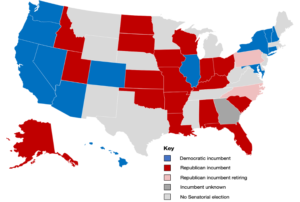 Joe Biden ran on a climate change agenda and has laid out his plans for early action, but what might the ‘medium-term’ for climate action and the 2022 midterms look like?

Although the configuration of the current Senate is not yet decided, political operatives are already looking forward to the 2022 mid-term election. If Democrats do not win both special elections in Georgia in January 2021, they will not have the majority in the Senate, which, as noted in earlier blogs, will greatly hamper the Democrats’ legislative agenda and make wide-ranging climate legislation a virtual impossibility.

However, they could capture the majority in 2022. U.S. Senators serve six-year terms, meaning that the same seats are up for re-election on a rotating six-year schedule. The seats up for re-election in 2022 pose better opportunities for Democratic gains than did the elections in 2018 or 2020, with three vulnerable Republican seats (see Figure 1 below). 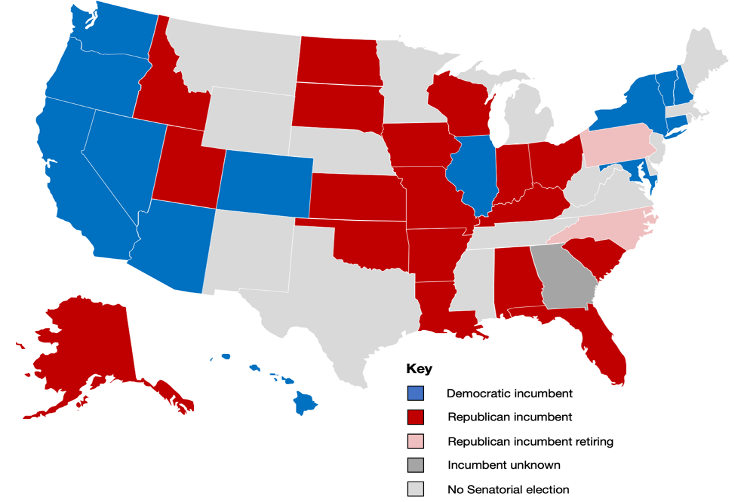 It is too soon to tell what will happen in the mid-term elections, but the most recent data show Republicans are well-positioned to take back the House. Still, some Democrats are confident they can hold onto the House. If Democrats win majorities in both houses of Congress in 2022, then the second half of the Biden administration’s term could, unusually, be more productive than his first. This would give him greater opportunity to pass comprehensive climate legislation, which could include a carbon tax, major investments in green technology and infrastructure, and regulation of the energy sector. If Republicans maintain their lead in the Senate, with or without a majority in the House, it is unlikely that any of these would pass during Biden’s presidency.

With Congress shifting its focus to the mid-term elections in 2022, the Biden administration will still take advantage of its ability to advance climate initiatives in the executive branch. Increasing the use of clean fuels through government procurement, particularly in the military, is one major goal. The U.S. government spends approximately $500 billion per year on procurement, providing a large opportunity to develop a zero-emission transportation fleet. There will also be opportunities in rewriting agency rules and regulations (President Trump rolled back more than 100 environmental rules), increasing research and development in programs such as the Department of Energy’s Advanced Research Projects Agency-Energy, and prioritizing the climate issue in diplomacy.

At the state and local level, Republicans performed better than expected in this year’s election, gaining seats in state legislatures, giving them the advantage in the redistricting process next year. Whichever party has the ability to redraw districts, which is done every 10 years, has the power to increase the number of districts in their favor. This dynamic may help Republicans retake the U.S. House of Representatives and hold onto the majority for some time as they did from 2010-18. In the map below, the Republicans hold both the legislatures and the governorships of the states in red.

These state-level legislatures and governorships could set the political map for a decade to come in Republicans’ favor. This could lead to more state-level opposition to President Biden’s executive actions. The recently failed attempt by Texas’ Attorney General to sue swing states whose electoral votes secured Biden’s victory that was supported by the Attorney Generals of 17 other states is an early-warning sign of state vs. federal animosity. Additionally, these state wins for Republicans could influence voting laws to favor Republicans to be elected at the Federal level, further frustrating Biden and future Democrats’ efforts to pursue ambitious climate legislation.

To see how climate became such a major issue for the Biden administration and what climate action beyond the first 100 days may look like see our other blogs covering his election win: