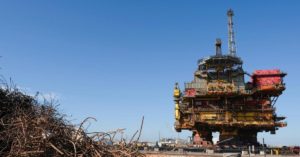 Originally published on the Orbitas website: Extending the case for responsible investment to tropical forest agriculture

“Stranded Assets”. “ESG”. If I were writing this article in 2000, these terms would barely register. But in 2020, they have both, in their own way, shaped investors’ thinking about making finance sustainable. Environmental Social and Governance (ESG) metrics allow investors to identify risk and opportunities not readily apparent in company financials. Stranded assets have become an invaluable guide to how a business model stacks up against future climate impacts and transtitions. They have already changed the conversation for the fossil fuel and auto sectors. They now need to do the same for tropical agriculture.

“Stranded assets” is now common parlance in the world of finance. In a recent article on Bloomberg titled ‘Stranded Assets Are Everywhere’,[i] Emily Chasan takes an expansive view on stranded assets in the time of COVID-19, defining them as premature ‘write-downs and operating losses.’ This concept is useful to frame the examination of assets that permanently lose their value as the economy recovers, though the vast majority in this particular case will regain their value as the economy rebounds. It therefore loses its predictive ability when applied to temporary issues rather than the projected structural shifts from climate policy transitions. The undisputed case of stranded assets has materialized in the fossil fuel sector. Tackling this stranded asset risk has become synonymous with the ‘E’ in ESG investing, bringing stranded asset risks to the forefront of these investment decisions.

ESG investing has come a long way in a very short amount of time. Although notable meta studies were published in the nineties and the turn of the century, it wasn’t until a seminal Harvard study[ii] in 2014 that investors started exploring the links between corporate performance on ESG issues and market returns. Despite the mounting evidence, mainstream investors continued to resist the value of material non-financial metrics. Early on, the easier argument to digest was the value of taking ESG issues into account as a means of curbing downside risk.  The ‘it can’t hurt’ approach provided the rationale for the early investors to start using ESG performance as a form of a “tie-breaker” in their investment decisions.

Academic research provided theoretical weight that ESG created financial upside (i.e. increased alpha), but it has taken years for this to play out on Wall Street. The real-world evidence is now stacking up. ESG funds test the thesis that superior performance on non-financial metrics gives rise to operational value creation. The result? These funds have racked up higher returns versus their conventional counterparts. Funds approaching their five-year mark, a key milestone in asset management, are now able to justify their convictions that responsible investment improves returns.

Mainstream investors are now voting with their wallets. Capital channeled to sustainable investment strategies hit record numbers the first quarter of this year, and sustainable funds are losing less than their conventional counterparts during the COVID downturn. Nevertheless, there is still a long way to go for ESG-mandated funds, which represented only $12 trillion of the $46.6 trillion of professionally mandated funds in the United States in 2018.[iii]

Following the 2008 financial crisis, a very similar diffusion of concepts played out in the oil and gas sector. In 2011, Carbon Tracker[iv] merged the “carbon bubble” concept underscored in climate science[v] and the concentrated risk posed by the fossil fuel sector to global financial markets. It posited that, to keep within a 1.5-2° Celsius (C) world, some unburned fossil fuel reserves would necessarily become stranded. In a follow-up report in 2013, Carbon Tracker identified[vi] that rating agencies and the market consensus valuations of oil and gas companies were failing to reflect the new realities of the coming low carbon world. The market did not account for stranded assets on the balance sheet of these companies.

At the same time, something noteworthy was taking place. Markets recognized that there was significant stranded asset risk for coal companies and investors began to reduce their holdings.  This emerging reality, combined with other factors such as the aging profile of coal plants in the US and the emergence of shale gas as a transition fuel, contributed to the general decline of coal company valuations (see Figure below), and the eventual bankruptcy of some, including the giant Peabody Energy. 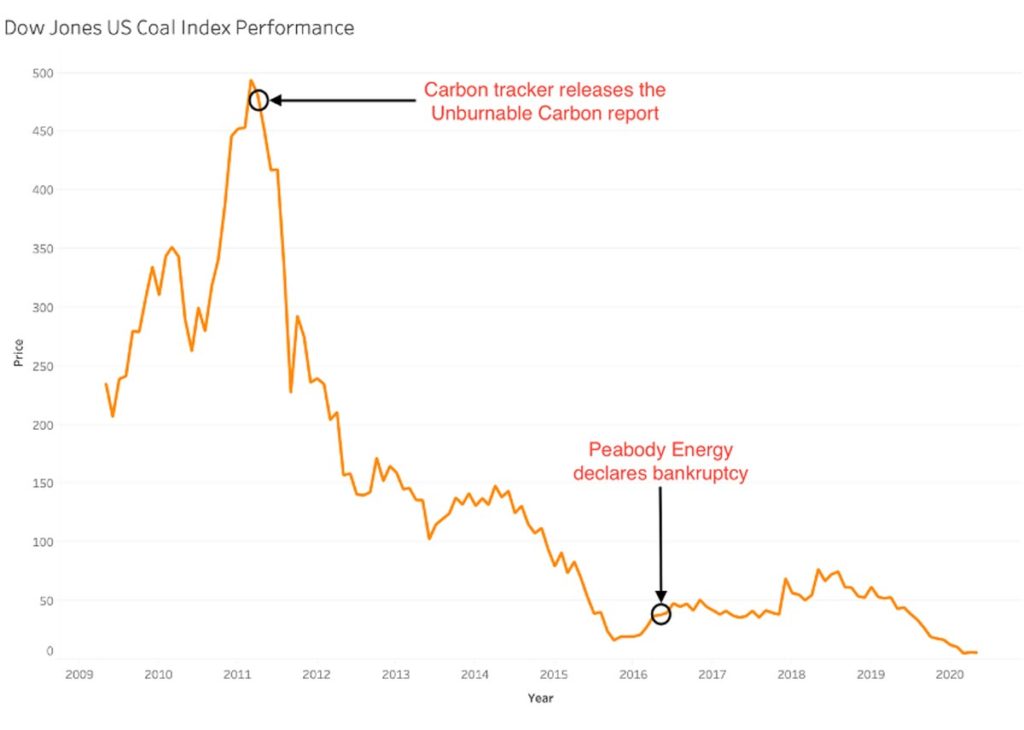 The same logic has not yet played out in the oil and gas sector, however. According to the IPCC’s 2°C scenarios, about 71% and 92% of developed oil and gas reserves, respectively, could be burnt.[vii] This suggests that the market has differentiated between the cases of coal on the one hand and oil and gas on the other.

Surprisingly, there are very few studies that have been carried out to quantify the connection between capital market valuation and fossil fuel reserves. A recent study in November 2019, set out to do just this. The study, using a sample of 679 North American Oil companies, found that while companies’ oil reserves are a key metric in firm valuation, the growth of these reserves actually decreases the value of the firm.[viii] This  inverse relationship between reserve growth and firm value suggests that the market is correctly penalizing fossil fuel companies for future investment in undeveloped reserves.

The conclusions from these analyses offer a lesson when we turn our attention to tropical commodities. There is no scenario modelled by any reputable research organization that will place us on a 1.5-2°C path without halting tropical forest loss. It is one of the largest emitters of CO2, accounting for 9% of global greenhouse gas (GHG) emissions. However, its importance lies not only in the fact that deforestation releases stored GHG emissions but also that, as forest is removed, its potential as a carbon sink is eliminated. Even the most ambitious climate change models with optimistic projections for carbon capture and sequestration do not dampen the importance of nature-based solutions. If any of the hard-to-decarbonize sectors such as transport or heavy industry do not meet the high targets of transition scenarios, major reforestation at an unprecedented scale will have to compensate for the shortfall.

Deforestation is inextricably linked to agricultural practices, whether clearing for cattle or removing forests to make way for crops. Therefore, any effort to reduce or eliminate deforestation will inevitably require changing the business models that tropical agriculture has relied upon in recent decades. There is no magic bullet for dealing with this; moreover, trends and consumer preferences evolve at a snail’s pace. But there is hope. If the movement to ESG has shown us anything, it is that millennials are not afraid to buck trends. They are more conscious of where they invest, what they consume, and how they spend their money.  If similar shifts happen within our food system, there will be reason to be optimistic. The awareness of effects of bad dietary habits on health, the egregious impact and contribution of beef to the GHG budget, and the emergence and growth of synthetic beef products means that expecting a shift in consumer preferences over the next two decades is reasonable. Such changes could fundamentally shift the market structure and change the operating environment for agricultural companies forever. As it stands now, markets are not pricing in these risks.

The tropical soft commodities sector needs to pay attention to stranded asset risks. The landbank is to soft commodity companies what fossil fuel reserves are to oil and gas companies. It is the main measure of corporate valuation. Margins are high (between 25-30%) at the plantation level and so land is the proverbial cash cow. When asked about what key metrics financial institutions look at, an Asia-based analyst at an investment bank pointed to ‘how much land a company has’, second only to yield or production potential. However, if stranded land enters the equation, this logic could reverse. In a world where land is constrained, higher yields take precedence over massive holdings of unconverted land. This dynamic threatens the viability of expansion-based business models.

Some financial institutions, mostly global in nature, do try to protect themselves against these emerging risks. They recognize that they must consistently deliver on standards to maintain their social license to operate. In the palm oil sector, a key method for multinational banks to tackle this risk is to segment the market. Instead of having banking relationships with the wide range of market participants, they limit their dealings to the larger and more strategic operatives. The proxies used to affirm good ESG standing are larger producers, members of certification standards (such as the Roundtable for Sustainable Palm Oil), or those with a public commitment to No Deforestation, Peatlands or Exploitation (NDPE). In trade finance, they defer to their clientele and depend on these larger companies to conduct the due diligence and ensure there is minimal counterparty ESG risk. This offers qualitative assurance that a bank is working with companies in good standing, but still does not quantify the risks these companies may face.

Do investors not appreciate climate risks? First, let’s be clear. The market does recognize these risks as evidenced by the use of ‘proxy’ certifications such as RSPO membership, but for them the risks are just beyond the horizon, just as they are for an oil and gas investor. The policy repercussions of climate change seem as far in the future as the physical impacts. Second, there is a real lack of actionable ESG research that can show investors what climate change policies mean for a myriad of financial considerations. Little is understood about how these policies may affect yields, what land becomes stranded and the consequential effects on price to book ratios.  Land values as collateral, where companies own these assets and whether the land companies own includes peatlands or rainforests are also underappreciated. Once researchers are able to provide guidance on these key questions, the market will incorporate this information and, if the efficient market hypothesis has anything to say about it, adjust valuations and pricings for tropical commodity companies.

We have made considerable progress studying our global economic system within the context of constrained resources. Environmental economics, a subset of conventional economics, examines market externalities while reaffirming that these are external to the general calculus.  New ways of thinking, like ecological economics, however, are grabbing a foothold. The market itself has never been more interested in the ‘E’ of ESG, and the current trend suggests this interest will sustain into the future. Current approaches that account for ESG risks, while partially effective at clarifying investment decisions, lack the actionable guidance assets managers can use. The next frontier in ESG is for these risks to be quantified and applied to use cases that capture the new climate reality and bring a forward-looking perspective beyond the typical investment horizon.