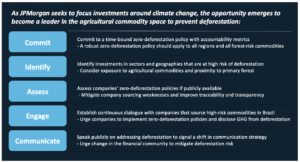 By Matt Piotrowski and Niamh McCarthy

Where can JPMorgan find opportunities to address its exposure to deforestation?

Climate campaigners have heightened awareness in recent years over the role of agricultural commodities in deforestation, which accounts for 15 percent of annual global emissions. This pressure from NGOs will only increase in the coming years. Companies operating in Brazil’s soy and beef industries will likely bear the brunt of scrutiny for links to the destruction of the Amazon and Cerrado biomes. As these companies come under increased scrutiny, so will those who provide them capital. It’s clear that banks and asset managers connected to these companies are faced with multiple risks through investments in agricultural companies that are linked to deforestation. Investors and lenders in Brazilian soy and beef companies play a crucial role in leveraging their positions to influence companies to curb their exposure to deforestation and its associated impacts such as biodiversity loss, human rights abuses, and displacement of indigenous communities.

Not only may financiers see financial and reputational risks from ties to deforestation; they could soon face greater scrutiny from U.S. lawmakers should Democrats retake the White House and the Senate in the general election next month. They are expected to significantly increase the country’s ambition around climate change. This could include requiring every public company to disclose their climate-related risks. More disclosure will demonstrate how exposed financiers are to deforestation risks from the agricultural sector.

The sense of urgency among financiers to address deforestation is growing quickly. Some investors have taken action. For instance, Nordea Asset Management recently divested from Brazilian meatpacker JBS over its ties to deforestation and the company’s poor handling of COVID-19 outbreaks at its facilities.

But others have taken a slower approach with weak commitments and a lack of clear communication over deforestation risks. For instance, on October 6, 2020, JPMorgan committed to aligning its financing with Paris Agreement Goals. This commitment is a strong signal to both companies exposed to climate risks and JPMorgan’s peers, but it leaves many issues unresolved, particularly quantitative targets or a pledge to achieve zero financed emissions by 2050, a key tenet of the Paris Agreement. JPMorgan does intend to provide support to clients transitioning to a low-carbon economy and to track their carbon intensity. However, without setting targets for absolute emissions, clients may improve efficiency while continuing to increase emissions.

Another notable omission from the announcement is a No Deforestation, No Peat, No Exploitation (NDPE) policy or a Free, Prior and Informed Consent (FPIC) policy. Without a commitment to make financing contingent on NDPE and FPIC adherence, JPMorgan may continue financing deforestation and human rights abuses, both directly and indirectly. Current JPMorgan policies prohibit financing clients “that intentionally utilize uncontrolled fire as a means of land clearance,” but fall short of addressing deforestation. JPMorgan does require soy producers to conform to the Roundtable on Responsible Soy (RTRS), which is a positive step, but the RTRS still includes the major soy traders operating in the Cerrado region that have come out against a moratorium on deforestation in the Cerrado. This does not mean that JPMorgan is unaware of deforestation risks in its portfolio. In 2017, the bank joined the Soft Commodities Compact, a voluntary program that calls for net-zero deforestation by 2020 in the palm oil, soy, and timber sectors. But this initiative is voluntary and, therefore, lacks accountability. Moreover, the Soft Commodities Compact also focuses heavily on certification schemes and updates on progress have been sparse. With agricultural companies in all commodities going to miss their 2020 target to achieve zero deforestation, the Compact has not inspired the change it originally sought. In fact, JPMorgan still invests in and provides loans to major soy traders that operate in Brazil – ADM, Bunge, and Cargill — along with major meatpackers, such as JBS, Marfrig, and Minerva. See our analysis of JPMorgan’s exposure to companies linked to Brazil’s deforestation.

Despite its current insufficient policies, the bank can build off of its recent climate commitment and take greater measures to address deforestation through engagement, clearer communications on the issue, and a time-bound zero-deforestation target. See the graphic below for steps that JPMorgan – and its peers in the financial sector – can take to mitigate deforestation risks and help prompt change in the agricultural industry. 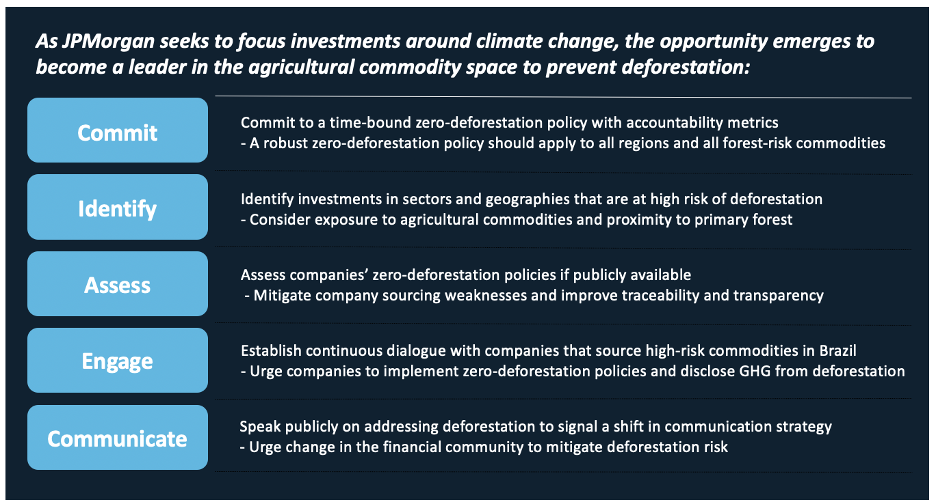