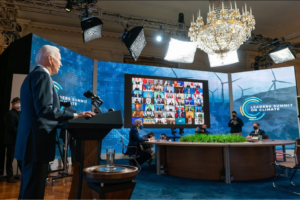 By Joshua McBee and Kyra Althaus

Though there are a variety of potential pathways to achieving the United States’ emissions reduction target, doing so will likely require a combination of executive action, efforts by states and cities, and new federal legislation. Models agree that achieving the U.S. NDC is feasible or nearly so and that, in the next decade, the greatest emissions reductions will need to come from decarbonizing the electricity and transportation sectors. In turn, these changes would pave the way for electrifying (and so decarbonizing) other sectors in the 2030s and 2040s.

We consider near-term legislative and administrative vehicles for implementing the policies necessary to achieve the U.S. NDC, as well as the political considerations relevant to the timing and content of relevant legislation. 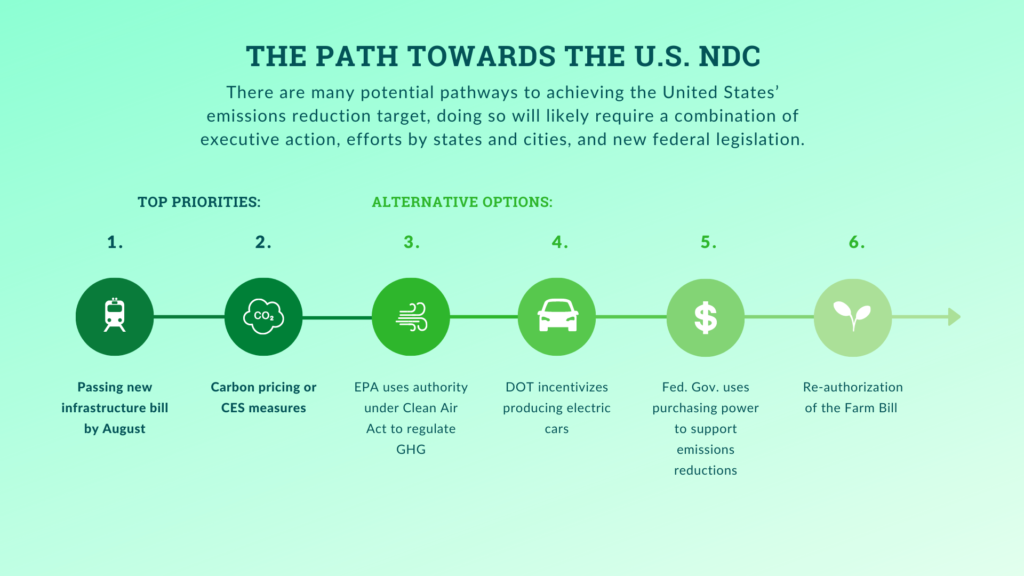 A variety of recent modeling efforts have been devoted to determining how much the United States can reduce its emissions by the end of the decade. Some of the models rely on carbon pricing, while others include a Clean Electricity Standard (CES), a policy that would require a steady increase in electricity generators’ output to come from carbon-free sources. At least one model, from the University of Maryland’s Center for Global Sustainability, relies on neither policy; instead it models the effects of a variety of federal incentives for clean electricity, electric vehicles, energy efficiency measures, retention of existing nuclear capacity, and carbon sequestration, as well as a suite of federal standards for existing coal and new and existing gas, among other policy measures. Models also differ in the degree of ambition they expect at the state and local levels. Despite these differences, the modeling is clear on one point: The United States is unlikely to achieve its reduction target without action by Congress.

The best chance to put the necessary policies in place at the federal level is likely the infrastructure bill the White House hopes to get passed by August, making it the best opportunity to enact the policies necessary to reduce emissions 50-52 percent by 2030. The White House wants to pass the infrastructure bill in 2021 for two main reasons. First, Democrats are expected to lose control of the House of Representatives in 2022, largely because voters have historically tended to turn on the party that holds the White House during midterm elections. Compounding the difficulties for Democrats this time around is the fact that, as a result of the balance of power in state legislatures across the country, Republicans will have considerably greater control over the redistricting process that will determine the boundaries of Congressional districts in the next cycle. If Republicans retake the House, there will be little prospect of Congress passing any major climate bills before 2025 at the earliest.

The second reason that the infrastructure bill is likely the best opportunity to implement the policies necessary to achieve the NDC is that, as midterms get closer, members of Congress running for re-election will become increasingly less open to taking potentially controversial votes that may be used against them in their campaigns. Any climate bill ambitious enough to put the United States on the path to achieve its NDC will have to involve substantial changes in many sectors of the economy and so is likely to be controversial in at least some quarters. As a result, Congress is much less likely to pass major climate legislation in 2022.

The content of the infrastructure bill has recently come into focus. On March 31, President Biden announced his “American Jobs Plan,” a sweeping proposal for more than $2 trillion worth of investments in roads, bridges, and public transit, as well as grid improvements, safe drinking water, research and development, and much more. It would be paid for through increases in corporate taxes and provisions to ensure U.S. companies do not avoid federal taxes through offshore “tax havens,” among other revenue measures. Notably, the White House’s plan includes a number of significant climate-related provisions, such as an “Energy Efficiency and Clean Electricity Standard,” investments in electric vehicle charging infrastructure, electrification of the federal fleet, and building retrofits (see Figure 2 below). 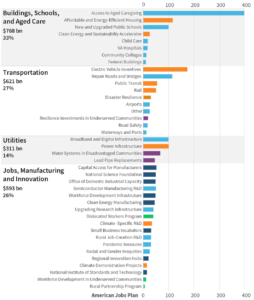 Going forward, a crucial open question about the infrastructure bill is how it will pass the Senate, if it does—through regular order (requiring 60 votes in favor), or through budget reconciliation (requiring only 50 Senators plus the Vice President). For the bill to pass through regular order, Democrats would need to secure the votes of at least 10 Republicans to overcome a Republican filibuster. To pass the bill through reconciliation, by contrast, Democrats would not need any Republican votes, provided that every Senate Democrat supports the bill. Some Senate Democrats—perhaps most prominent among them West Virginia Senator Joe Manchin—strongly prefer that the bill passes through regular order with bipartisan support, and President Biden himself has indicated that he would prefer this as well. However, many Senate Democrats, as well as many observers, think it is extremely unlikely that 10 Senate Republicans will support an infrastructure bill backed by President Biden and the Democrats. Senate Minority Leader Mitch McConnell’s comment that “One hundred percent of [his] focus is on stopping this new administration” reinforces this impression, as does recent polling showing that, while more Americans support the Biden administration’s infrastructure plan than oppose it by a wide margin, 74 percent of Republicans oppose it.

If Democrats use reconciliation, they will have to exclude any provisions they cannot convince the Senate Parliamentarian are related to the budget since reconciliation votes are only allowed to include provisions that raise money or spend money. This might endanger the CES, which mandates the increase of clean electricity and models suggest could reduce U.S. power sector emissions 80 percent by 2030, as a CES has no direct effects on the federal budget. However, Evergreen, an organization that advocates for ambitious climate policy, published a report earlier this year outlining six ways to design a CES or a CES-like alternative with the same effects that, they argue, would be compatible with Senate rules. At this point, it is unknown whether the Senate Parliamentarian will allow for the CES to be included in a bill using reconciliation. If, however, the Parliamentarian rules that the CES is not compatible with Senate rules, some Democrats may push for carbon pricing as an alternative. Provided all Democrats vote in favor, the Senate can also overrule the Parliamentarian’s decisions.

A number of economic models suggest that the NDC is achievable with either a CES or carbon pricing, provided that the carbon price is high enough (likely starting somewhere in the $25-50 per ton range and increasing over time). It is less clear whether either a CES or a carbon price could secure the support of a majority in the U.S. Senate. A CES has been embraced by the White House, many prominent advocates and commentators, and, most recently, by a coalition of more than 150 environmental groups. At the same time, carbon pricing may encounter less resistance than a CES from the oil and gas industry, which has recently embraced carbon pricing more enthusiastically than ever and views the push to “electrify everything” that a CES would supercharge as an existential threat. The industry’s support for carbon pricing typically comes with a condition, however: the sector wants any carbon pricing legislation paired with rollbacks of existing environmental regulations, restrictions on the federal government’s ability to issue new ones, or preemption of more ambitious state and local policies. Given this stance, the industry is likely to push back on any policy that is ambitious enough to put the United States on a path to achieving its new NDC. Because Democrats cannot afford to lose even a single Senator if they are forced to pass an infrastructure bill through reconciliation, the industry’s position makes the politics of ambitious climate provisions extremely delicate.

Despite the Democrats’ thin margins in Congress, the likelihood that an infrastructure bill of some type will pass is good. President Biden is pushing hard for an infrastructure package, and Democratic leadership sees passing meaningful legislation as key to the party’s electoral prospects going forward. Nevertheless, if Democrats cannot pass an infrastructure bill, it would be extremely difficult for the United States to achieve its new NDC. However, there are a variety of steps Congress and the Biden administration can take to ensure that the country at least comes close to reaching the 50-52 percent reduction.

If Congress does not pass an infrastructure bill with significant climate provisions, the following are likely options available to Congress and the Biden administration for reducing U.S. emissions.

In addition, the EPA has already taken steps to sharply reduce the use and production of hydrofluorocarbons or HFCs, and Congress recently voted to overturn the Trump administration’s lax regulations on methane emissions from oil and gas operations, in effect reinstating the Obama administration’s much stricter policies. These actions, plus more coal retirements, are expected to bring about a significant amount of emissions reductions.

It is unclear, however, exactly how close these initiatives would get the United States to achieving its NDC. However, there is reason to think that they could help to reduce emissions by more than 40 percent, at least if combined with sufficiently ambitious efforts at the state and local level. We Are Still In, a coalition of local actors and business leaders, suggests that enhanced state and local action alone could lead to reductions as high as 37 percent below 2005 by 2030. If that is correct, then combining state and local action with the initiatives mentioned above would likely be enough to reduce emissions by more than 40 percent and put the new U.S. NDC within reach.