President Biden has nine staffers with “climate” in their titles, compared to five for President Obama when he first took office. The structure of the team shows we are witnessing the most ambitious climate administration we’ve seen yet and an overhaul to Federal climate action. This brief explores the climate credentials of active climate-focused staff. The graphic below outlines the unprecedented structure of President Biden’s climate team. 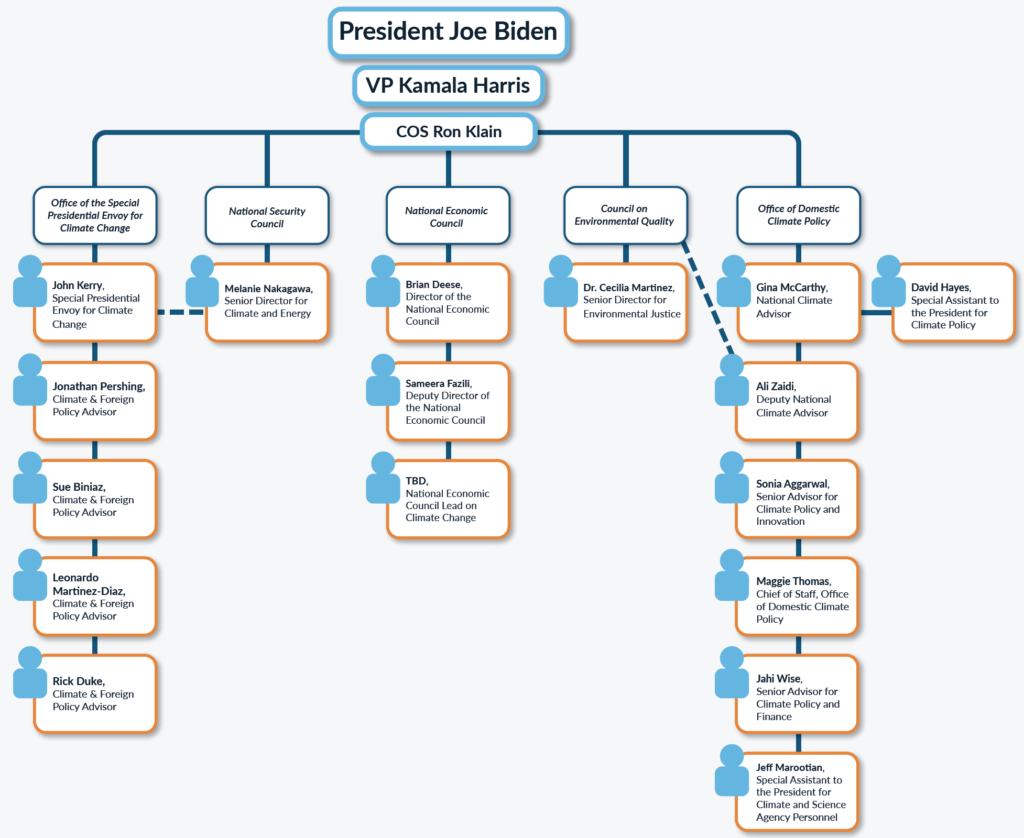 John Kerry, as Special Presidential Envoy for Climate Change, will have the rank of a Cabinet Official and be part of the National Security Council (NSC), giving him direct access to the President and allowing him to be involved in high-level discussions and decision-making. Kerry’s main office will be located in the State Department rather than in the White House.

Gina McCarthy, former Administrator of the Environmental Protection Agency, occupies the newly created position of National Climate Advisor, will have direct access like Kerry and is expected to work in the White House (see Figure 1 above). Having both of them serving in these positions underscores how climate change will be central to President Biden’s foreign policy, national security decisions, and the domestic economic agenda.

Kerry’s staff will work mostly at the State Department, allowing them to elevate climate change in America’s Foreign Policy approach. Sue Biniaz, a State Department lawyer who was central to the Obama administration’s Paris Agreement negotiations and Jonathan Pershing, who was President Obama’s Special Climate Envoy at the State Department and subsequently a program director at the Hewlett Foundation, will fill two major roles for Kerry at State. Their titles are not yet announced, as of the date of publication of this brief.

Two other members of Kerry’s team include Leonardo Martinez-Diaz, who worked as Deputy Assistant Secretary of the Treasury Department for Energy and Environment under President Obama, and Rick Duke, the Special Assistant on climate change. Kerry may also appoint one or more deputies. Jonathan Pershing would be a likely candidate to have that title for one year, while he is on a leave of absence from the Hewlett Foundation.

Having a robust staff (numbering between 40 to 80 foreign service professionals) at the State Department frees Kerry to focus on core high-level issues, such as building international climate agreements, reworking trade agreements, revamping global climate finance and collaborating with development banks and other stakeholders. Moreover, with the goal of including climate in all international decisions, Kerry may also have staff at other agencies. It is not yet clear how Kerry will work with the Department of Defense (DOD), but newly created positions at the DOD that deal with climate should help coordinate efforts there.

Within the White House, Kerry is expected to work closely with Melanie Nakagawa, Senior Director for Climate and Energy, a new position that is part of the NSC. Nakagawa was a strategic adviser to Kerry while he was at the State Department in the Obama administration, where she worked on a variety of issues, including renewable energy and climate finance. Experts applauded the choice because of Nakagawa’s work in both government and venture capital. She may be highly involved in President Biden’s international climate summit scheduled for April 22, which will allow the administration to showcase what it has done since it took office and establish a path to developing a new NDC ahead of the COP in December.

President Biden’s international team will likely tackle the financing of fossil fuel projects early on. During his confirmation hearing, President Biden’s Secretary of State, Anthony Blinken, was asked by Senator Jeff Merkley (Democrat, Oregon), whether the Biden administration would “push the international lending institutions that we participate in to stop funding new fossil fuel projects.” Blinken confirmed that it would, adding: “We want to make sure that we are not doing anything to facilitate countries exporting dirty technology around the world.” Blinken went on to mention China, specifically its Belt and Road Initiative. He did not specifically mention any particular lending institutions. Domestically in the United States, however, the focus will primarily on the U.S. Development Finance Corporation and the Export-Import Bank, both of which campaigners have mentioned in this connection.

For domestic policy, Gina McCarthy, as a domestic climate czar, will be empowered to interact with agency personnel and external stakeholders using her position of authority to infuse climate expertise and decision-making throughout various agencies and work with Congress.

In order to move climate policy forward, however, McCarthy will have to help rebuild the agencies that were decimated by the Trump administration, which reduced staff, cut budgets, and eliminated science and research programs. Her deputy, Ali Zaidi, who worked with McCarthy when both were members of the Obama administration, will be tasked with leading the White House Office of Domestic Climate Change Policy, which was created during President Obama’s first term but eliminated by the Republican House in 2011, and reportedly had a hand in writing the early climate-related executive orders. Key staff for Zaidi’s White House Office of Domestic Climate Policy includes:

This group is relatively young and progressive with strong climate credentials, and some are new to Washington positions. The picks, whose roles will involve coordinating action rather than actually writing policy or regulations, were likely made with the thinking that they will emphasize new ideas on the federal climate change agenda, with a focus on environmental justice, digital media, finance, innovation, and advocacy. The choices for these roles back up President Biden’s desire to increase ambition in these areas, particularly environmental justice, which is the main climate focus for the African-American community, a key voting bloc for the Democratic party.

Michael Regan is still under review for his confirmation as Administrator of the Environmental Protection Agency but has received confirmation from the Senate Environment and Public Works Committee. In early statements, Regan has appealed to Republicans that he will consider all constituencies and be fair-minded as he implements the Biden administration agenda to address climate change. In his confirmation hearing, he focused on environmental justice, the need to not leave fossil fuel-dependent constituencies behind in the transition to clean energy and received statements of support from Republicans.

At the Department of Energy, former Michigan Governor Jennifer Granholm has already received confirmation from the Senate Energy and Natural Resources Committee. Her early statements have been focused on developing America’s green transition as an economic imperative and the transition to clean energy including current fossil fuel workers.

How these cabinet officials and their teams will work with McCarthy and Kerry when appropriate is still to be determined. During Regan’s hearing, he had to make a point of saying he will be in charge of making decisions at the EPA to address Republican concerns that Kerry and McCarthy will serve as unaccountable czars unburdened by Congressional oversight.