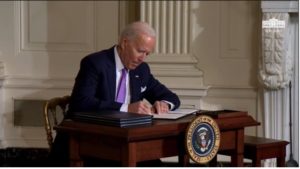 By Matt Piotrowski and Joshua McBee

The Trump administration devoted considerable effort to undoing environmental regulations such as restrictions on oil and gas and other development on protected lands, fuel efficiency standards and greenhouse gas emissions rules for motor vehicles, standards for taking climate impacts into account in cost-benefit analyses, regulations governing air pollutants and toxic substances, protections for threatened and endangered species, and many other areas of environmental policy. The ramifications of these actions are significant, with rollbacks projected to result in an additional 1.8 billion metric tons of greenhouse gases in the atmosphere by 2035. These additional emissions amount to about three years of emissions at current levels. President Biden ordered a thorough review of all Trump-era rollbacks in an executive order on his first day in office, making clear that undoing former President Trump’s attempts to undercut environmental rules is a top priority for the Biden administration. This message has been reinforced in a variety of ways since that executive order. However, as many observers have noted, in some cases, undoing Trump-era rollbacks will be neither easy nor straightforward and will likely take some time.

This section summarizes notable regulatory actions by the Biden administration to date and offers analysis concerning likely future actions, obstacles the administration may encounter, and considerations it will need to consider as it seeks to reinstate or strengthen the environmental policy regime that the Trump administration sought to dismantle.

Perhaps the most notable Trump-era rollbacks targeted by President Biden’s day-one executive order are standards regulating fuel efficiency for cars and light trucks administered by the Department of Transportation (DOT) and the Obama-era greenhouse gas emissions regulations for motor vehicles administered by the EPA. The order directs the relevant agencies to consider suspending, revising or rescinding Trump-era actions by relevant agencies by the end of July. The administration has yet to make any specific pronouncements on the content of any proposed replacement rules, they are likely to be at least as if not more ambitious than the Obama era. In any case, finalizing replacement rules is expected to take some time—likely years. The process involves many steps, including formally publishing a proposal to change the rule; opening it to public comments; drafting legal, economic, and scientific justifications for the rule; and performing complex technical analyses of the impacts of the new rule on highway safety, air quality, and consumer behavior. Another likely cause of delay is the need for coordination between DOT and EPA, as well as with the state of California, which may develop its own, stricter rules if the Biden administration reinstates its authority to do so.

The President’s executive order also directs agency heads to consider suspending, revising, or rescinding Trump-era regulations concerning the use of scientific research in Federal policymaking, the process for calculating costs and benefits of proposed regulations, harmful pollutants (such as mercury) that are associated with coal- and oil-fired power plants, building and appliance efficiency standards, and the social cost of carbon. The deadlines for some reviews have already passed, and Secretary of the Interior Deb Haaland has already recommended restoring several protected areas to their previous boundaries and restoring previous protections. Other deadlines are later this year. Regardless, few if any replacement regulations are likely to be finalized this year.

Finally, President Biden’s executive order directs relevant agencies to review the boundaries of national monuments (some of which President Trump altered), restores protections for some coastal areas in Alaska the Trump administration opened to oil and gas development and revokes the construction permit for the Keystone XL pipeline. Though the President’s order immediately revoked the permit for the pipeline, the reviews and any subsequent changes to national monument boundaries and development restrictions are still ongoing and will take some time.

The Biden administration has also taken or signaled its intent to act on several other fronts.

The Trump administration also targeted the Obama administration’s Clean Power Plan (CPP), which regulated greenhouse gas emissions from power plants, replaced it with the far weaker Affordable Clean Energy (ACE) rule. In January, a federal court struck down the ACE rule, clearing the path for the Biden administration to replace it with stronger regulations. EPA administrator Michael Regan has already indicated that, rather than reverting the CPP, which was mired in legal challenges, it will craft an entirely new rule to replace the ACE rule. The administration has not yet indicated what form the new rule will take. As emphasized previously in Climate Intel, the Clean Air Act gives the agency several options. Regardless of which it chooses, the rule will likely be stronger than its Obama-era predecessor. Finalizing the new rule will take some time due to the need to design carefully to avoid being struck down by the Supreme Court. If Congress passes a national clean electricity standard, which is now being considered in the Democrats’ infrastructure bill, taking some pressure off the Biden administration’s rulemaking process.

The Biden administration and Congressional Democrats were widely expected to reverse other Trump administration environmental rollbacks using the Congressional Review Act (CRA), a law that allows Congress to reverse regulatory actions finalized by an outgoing administration during the last 60 days of its tenure. However, the window for using the CRA has now closed, with Congress choosing to invoke it only one time to reinstate environmental rules the Trump administration rolled back, namely Obama-era rules requiring oil and gas companies to monitor and fix methane leaks. It is possible that the administration will seek to replace these rules with even stronger ones in the future, but given how much further along this aspect of its climate agenda is than others, it is more likely is that the administration will seek to further curtail methane emissions by including complementary measures in any infrastructure bills.

The Biden administration’s actions to date and its plans illustrate a commitment to a whole-of-government approach to climate action. However, the myriad difficulties besetting President Biden’s regulatory agenda illustrate how extensive and how successful the Trump administration’s deregulatory efforts were, the general incompetence of many of its efforts notwithstanding. Together with a Supreme Court that is now more hostile to environmental regulation than the Court has been in decades, the Trump administration’s legacy on environmental regulation will be a significant constraint limiting the implementation of President Biden’s regulatory agenda.