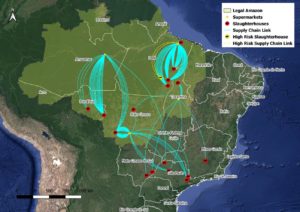 A new report from Chain Reaction Research (CRR) has found that Casino Group faces up to USD $2.5 billion worth of risk from divestment and increased financing costs following investigations that found Casino Guichard-Perrachon S.A. (Casino Group) subsidiaries bought beef from farms involved in illegal deforestation. A coalition of environmental NGOs and indigenous groups has already threatened Casino Group with a lawsuit if it fails to adopt more stringent sustainability policies.

The top ten investors in Casino Group have more than USD $14 billion in exposure across the Casino Group and its subsidiaries. Several of these investors have signed the New York Declaration on Forests; the Soft Commodities Compact; adopted a No Deforestation, No Peat, No Exploitation policy; or hold other deforestation policies. Other Casino Group investors include Nordea Asset Management which divested from Brazilian meatpacker JBS earlier this year over deforestation, and Storebrand Asset Management which led over 30 financial institutions to sign a letter demanding the Brazilian government act on Amazon deforestation.

“Casino Group and GPA have lagged behind industry peers. Their reliance on direct suppliers to monitor their supply chain for them to prevent cattle driven deforested beef from entering their stores leaves them exposed to material risks,” said Matt Piotrowski, an analyst with CRR.

The potential lawsuit that may be brought against Casino Group will argue the company and subsidiaries are in violation of the French Devoir de Vigilance law (the “Vigilance Law”), which imposes mandatory due diligence for human rights and environmental impacts for French companies. In its 2020 vigilance plan, Casino said that 100 percent of GPA’s suppliers adhered to its Responsible Beef Sourcing Policy in 2019, which contradicts the findings of the research.

CRR Analyst Gerard Rijk stated “GPA and Casino Group face a high risk of an escalating financial impact through financing and reputation risk. GPA/Casino shareholders could risk a material part of their invested value as debt ratios could deteriorate further. Banks could leverage their financing dominance to engage with GPA/Casino towards a best-in-class due diligence process.”

Casino Group is a large French food retailer where it has a 10.6 percent market share. It generated €34.6 billion (USD 38.8 billion) in net sales and employed 220,000 people worldwide in 2019. Casino Group owns 3,225 stores across subsidiaries in Brazil, Colombia, Uruguay, and Argentina, including GPA. In 2019, GPA was Brazil’s second-largest retailer, with a turnover of BRL 61.5 billion (USD 11.4 billion) in 2019. That year, the company employed 110,834 people, which is more than any other retailer in Brazil and about half of Casino’s global workforce.

You can read the full report here.

To submit questions or to request an interview please contact Kyle Saukas: saukas@climateadvisers.org