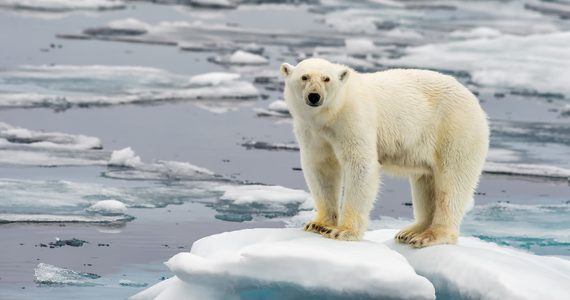 There’ll be a couple of bears in the room when the leaders of the five Nordic nations meet President Obama at the White House tomorrow. Authored by Durwood Zaelke, Nigel Puvis & Paul Bledsoe

A version of this piece appeared on the Huffington Post.

There’ll be a couple of bears in the room when the leaders of the five Nordic nations meet President Obama at the White House tomorrow. One, as many commentators have noted, is Russian aggression, and how to curb it. The other menace is less well publicized, but even more formidable —climate change.

The summit brings together the leaders of six of the eight nations with territory beyond the Arctic Circle. They know firsthand that the region is warming much faster than the global average.

But besides getting hotter, the Arctic is also getting darker. The combination is resulting in three self-reinforcing feedback loops, which are further accelerating the temperature rise that harms us all.

The white ice that used to cover the Arctic Ocean – reflecting much of the incoming sunlight back into space – is shrinking, uncovering dark water, which absorbs the heat instead. Since 1979, loss of sea ice has warmed the planet a quarter as much as carbon dioxide emissions from all the vehicles, power plants, deforestation, manufacturing, and other sources worldwide.

Wildfires – as the Fort McMurray catastrophe in Alberta underlines – are more frequent because the world is getting hotter and drier. They set off another dangerous feedback loop by emitting both carbon dioxide and black carbon soot.

Black carbon – which also comes from dirty diesels, brick kilns, and primitive cookstoves – is the second biggest climate pollutant after carbon dioxide. It absorbs heat while in the atmosphere and darkens snow and ice when it falls out on them, causing them to absorb more heat and melt faster. The Arctic’s largest emitters are Russia and Canada, mainly from wildfires and agricultural burning, and the US where – as in the Nordic countries – diesel transport is the biggest culprit.

Finally, a warmer planet is pushing the permafrost line further and further north, releasing methane, a climate pollutant more than twenty times more powerful than carbon dioxide. Even a partial sudden release of methane from melting permafrost could cause damage worth $60 trillion over the next ten years, crippling economies.

Fortunately, leaders at the summit can draw on their shared experience in the Arctic to implement fast mitigation measures themselves and persuade other countries to follow suit. They can start by committing themselves to cutting the super pollutants – black carbon, methane, tropospheric ozone (a principle component of urban smog), and hydrofluorocarbons (HFCs), used primarily as refrigerants. Reducing them can slow warming faster than any other single strategy, and thus do the most to counter the feedbacks. It could quickly cut the rate of climate change by up to two-thirds in the Arctic – and by up to half globally.

That would represent an enormous victory, not just for the Arctic but for the world. And it would have other massive benefits besides slowing climate change. Cutting black carbon could prevent up to 80 million premature deaths from air pollution over the next twenty years, and even more illness. Cutting methane and tropospheric ozone would increase agricultural productivity by hundreds of millions of tons, helping to reduce food prices and avoid hunger.

The US and Nordic countries have the technology and knowhow to do this fast and effectively: California, for example, has already cut black carbon by 90 percent in recent decades. And they can share their experiences with the developing countries that only now are starting to address their air pollution. As Chair of the Arctic Council, the United States has an opportunity to set a target for reducing black carbon in the region and encourage observer nations—including India and China—to increase their ambition in curbing this pollution.

The US and Nordic countries can also minimize methane leaks from oil and gas development. In a major step, the US today announced measures on the pollutant for the oil and gas industry, and for new and heavily modified equipment.

The leaders also should redouble their commitment to reducing tropical deforestation, responsible for more than a tenth of climate pollution: saving and restoring forests is one of the biggest and most cost-effective strategies for controlling carbon dioxide. Over the past decade, Brazil has reduced deforestation in the Amazon by 70% while simultaneously increasing rural incomes and agricultural production. Norway is leading global efforts to replicate this success in Indonesia and other tropical forest nations.

Last but far from least, the US and Nordic leaders have an opportunity to finalize a global agreement this year to phase down HFCs through the Montreal Protocol, the world’s most successful environmental agreement.

They should agree at the summit to significantly increase funding to help developing nations phase down HFCs quickly. The US and Norway have already announced further financial support for the HFC phasedown, and other leaders at the summit could add their own fast-start contributions. These should include a fund that would immediately start helping developing countries prepare for the phasedown, and to capture the significant energy efficiency gains available from better air conditioners using less polluting refrigerants.

Such efficiency gains could double the climate benefits of the phasedown, saving the equivalent of 200 billion tons of carbon dioxide emissions. The efficiency gains could save as much energy in India by 2030 as would be provided by up to 140 medium size peak power plants – up to 500 by 2050. The effect could be even bigger in China, where the savings could avoid the need for up to 600 such plants by 2030, and more than 700 two decades later.

Such strong measures on the super pollutants may be the best, perhaps the only way, to slow warming in the Arctic fast enough to slow the self-reinforcing feedbacks pushing the climate problem out of control. Nordic leaders should join President Obama and work with the major economies to cut the rate of Arctic warming by two-thirds. That would be the best way to tame the climate beast in the room – before it attacks us all.

Durwood Zaelke is founder and President of the Institute for Governance & Sustainable Development and co-directs a related program at the Bren School of Environmental Science & Management at UC Santa Barbara.

Nigel Purvis is the founding CEO of Climate Advisers and a former senior U.S. climate negotiator at the State Department.